Before anything else lets remind the futur reader(s) there may be additional information related to my present announced topic over there:

Today is my 10th anniversary of vaporist initiation and i have no regrets for my former smoker life at all, except sometimes i miss some "cold nose" psychosomatic hint triggered by smelly cannabis oils concentrating in a messy consumption tool... It lasted 10 days before i resurfaced, i could never imagine the suite.

Well i tried, i called this a "fantasy" and it was, although there were efforts made to render it viable, at least intellectually. Back in 2010 i raised 2 main topics, one about the Steinel "heat gun" series and the other focused on induction heat, for example this was a couple years later: 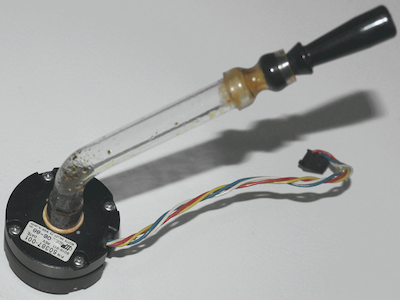 Magnetic Flux-Concentration + shielding, with Electro-Magnetic Interferences in mind... It captured my imagination after i realized that stepper motors already sum a lot of time-proven know-how and hence perhaps it wouldn't hurt to value such technical legacy. Plus there's a potential bonus feature should my intuition on "microphonics" ever prove right: 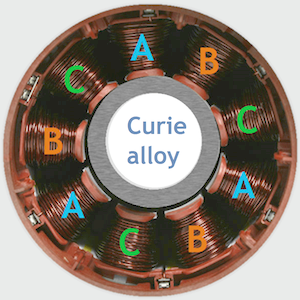 All it takes to obtain mechanical movement is the continuous magnetic "bias" field of a permanent magnet; that's how dynamic earphones work too. So in principle it must be possible to make the IH WorkCoil also capable of causing audible/ultrasonic vibrations, perhaps even shake it up in order to prevent a "cake" layer to form as a by-product of condensation inside the bowl. And i think this could happen to solve many issues raised so long ago:

In the early days above, fresh conceptual developments below: 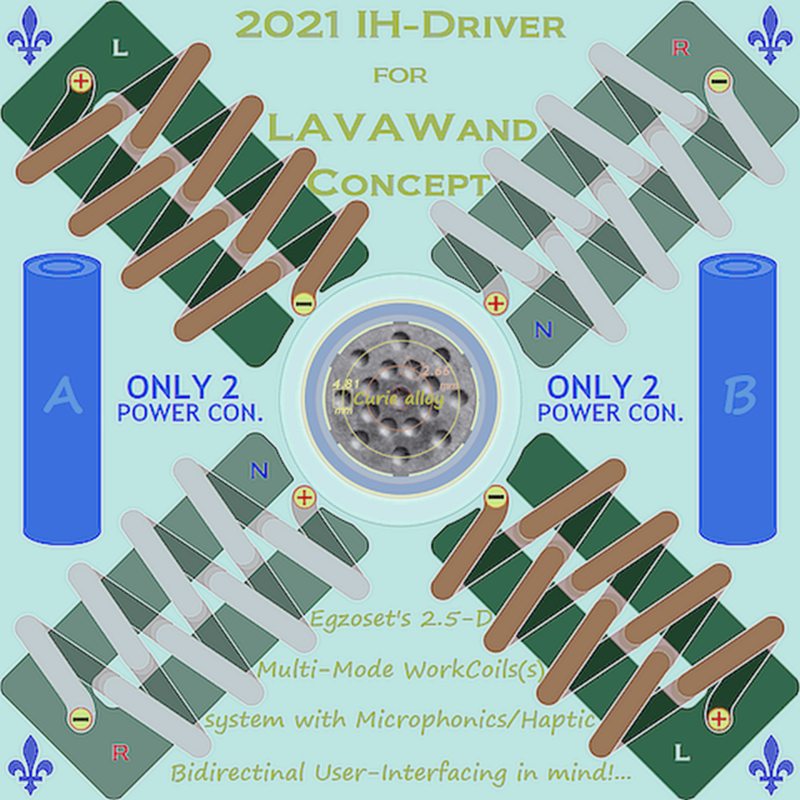 1 same topic all along: the direct magnetic combination of power from electrically independent cells. Doing so offers an unprecedented level for fault-tolerance by allowing 1 cell to die and yet leaving the other operate until depleted as well; which means a loss of only 50 % compared to 100 % when all goes down, or a mere 33 % if that's from a set of 3 cells.

Such manner of direct collaborative power conversion implies synchronization and even framed sequences to perform multiple duties, as for "scanning" and/or "calibrating" the susceptor, etc. An much simplistic KISS scenario may be to perform some classic "Royer" implementation around a 1-Phase 8-Poles setup: 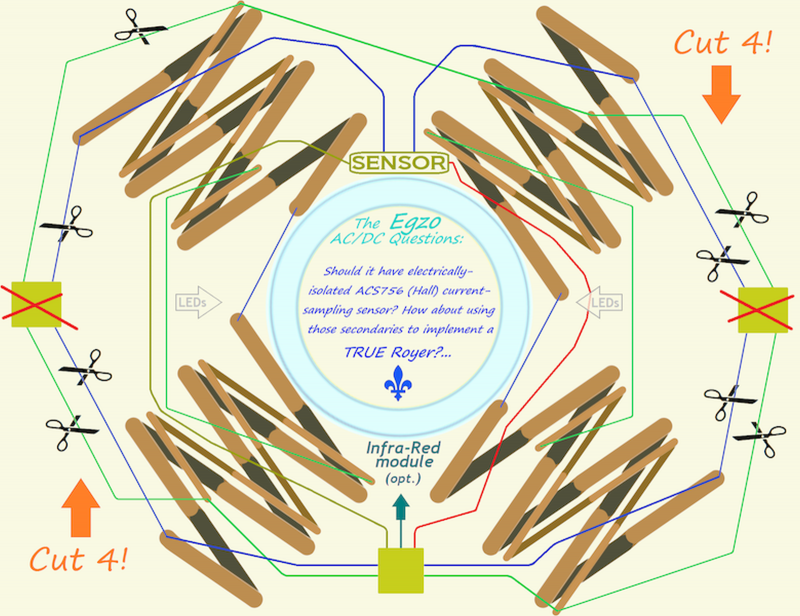 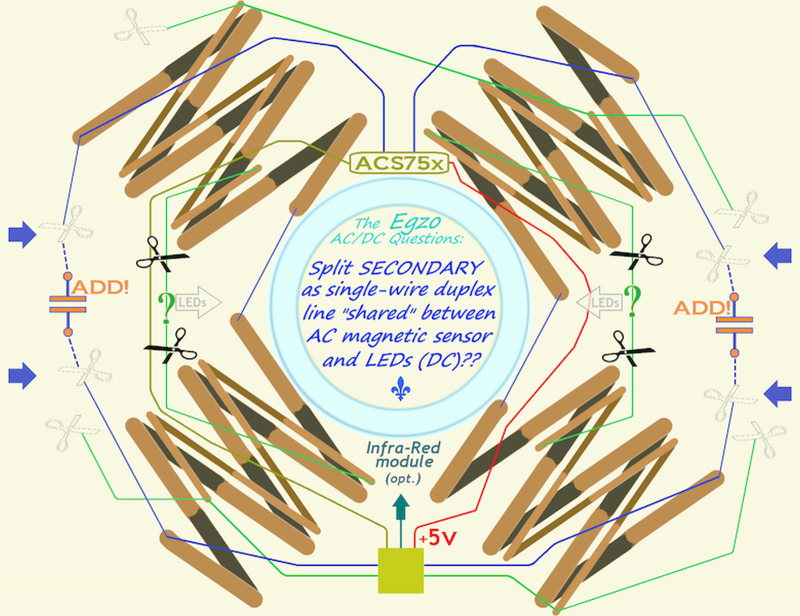 Assuming this building block will work as expected: 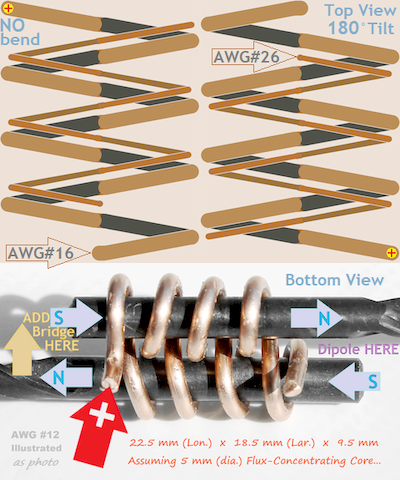 In retrospective i realize that's quite a bit unusual for any inductive winding...

Anyway if the stars align vaforably this could translate into very thin IH drivers, here's a crude evaluation using AWG#16 Litz (100 x AWG#35, i think)... Diameter of the conductor is 1.29 mm and this makes 2 copper layers surrounding a flux-concentrating core restricted in thickness to 5 mm in my illustration, though we can easily imagine it getting larger as it's rendered flat. { 2 x 1.29 } + 5 = 7.58 mm so far. Now add 1 mm for a PCBoard then 3 more for casing and clearance overall. That's still less than an "AA" battery!! Consequently it makes sense to extend the concept by stacking 2 WorkCoil assemblies on top of each other, still concentrating strongly varying flux withing a relatively short cylindrical volume magnetically driven at up to 24 different pole locations i suspect. One way or another certainly many more poles than air-core selenoïds anyway. The advantage being that divide to conquer design forces electrical stress to distribute more evently across components, in this last case illustrated above we get 4 "U-core" units per PCBoard with a possibility to stack 2 because power cells are so large in comparison. Even better with 3 synchronized cells and 6 "U-cores" as their individual target output significantly plumets while safety margins go up.

But does it work?

One way to get some fair incentive would be to experiment with microphonics: if coupling is strong then this should be mutually valid in both directions. The beauty of it being that NO power is required at all! Just a permanent magnet and some ferro-magnetic susceptor mass, 0.75 g or so in my LAVA concept - which by the way is only that, a concept, tagged so Google shall find my related posts with more search "hits"... Objectors and "influencers" alike love to describe me as a SPAMMER, in the house of mirros more often than not.

Ultimately i envison a modular system with plenty of provisions for all sorts of improvements, starting with "Harm Reduction" in mind that instead i'd prefer to tag "Vilification Reduction", if the choice were only mine... We're talking about precision metered dosing, session recoding, even sessions "sharing" over "social" networks as forum boards, much the same as with a karaoke game except on-line and remotely. The best curves then should make excellent templates to help newbies acquire operator skills even more quickly - not that pulse heating is hard to figure out. Etc., etc. All prospects blocked by Mazzilli's disciples over-exgagerating the merits of so-called "DNA" partly shared with the NoFlame/SJK: real minimalist protections in the power stage. Too little actually.

Then a final argument: air-core selenoïds can't be compressed indefinitely while these scenarios suggest the planar way is the one to pick on a long run, because that's naturally evolutive, practically inviting direct/collective power conversion, which brings the matter of synchronization, master clock regeneration and more...

Time for a puff.